Skip to content
Home/Bujutsu, Training/Martial Arts Doesn’t Change You Into A Hero
Previous Next

Martial Arts Doesn’t Change You Into A Hero

Joe is a bit of a jerk.
Joe joins a dojo.
Joe practices martial arts for 12 years.
Joe is still a jerk.

We've all met Joe. At least a few times. That's the short of it. The fact is studying budō is not a guarantee that you will become a better person. Joining a yoga group will not make you a better person. There is this idea that you can learn respect and grow humble from the study of martial arts. The sad reality is that if you don't want to change anything, then you will come out as you went in.

People want to claim that studying martial arts will help you learn to respect and have confidence. There is, of course, the opportunity to learn these things, however, if you are not an open-minded person willing to change, then you will not. The real pursuit of budō is the pursuit of developing oneself.  Often the idea is heavily focused on technique. The technique is, of course, important. Our hearts and minds, though, are the real core we need to work on continuously.

The amount of childish behavior is rampant in even the highest echelons of martial arts. The oldest bujutsu schools in Japan are not exempt from lies, immature cold-shouldering, snobbery, backstabbing, and discrimination.  People like to throw the word McDojo around to signify an inferior and bulls*** school. However, even the "best" schools in Japan are full of problem teachers and students alike. There is no shortage of morons in budō.

If you're reading this and feeling some anger or annoyance, then you should step away and think about why you are upset at reading my viewpoint. Social media and avenues such as forums and Youtube create spaces where we can lash out at people while remaining anonymous. It helps bolster us to make disparaging comments and insults. The budō community is full of these types of people. Why? If budō practice is supposed to make us better people why all the childish behavior? Where is the compassion?

I often make mistakes. I am not perfect. I have done stupid things in the past. I have unintentionally hurt people with careless words or actions.  I have, however, always apologized for my transgressions and owned up to them. The day after some folly, I try to understand what I did wrong and avoid doing that again in the future. I try. I work hard.

Those that do not try hard to adjust their perspective and attitudes are forever lost in the sad little game of collecting techniques or tattoos or certificates or school names for themselves to build up an image of a martial artist. There are many people practicing budō that are righteous and sincere. They are a bit overshadowed though by the selfish and malicious. If your heart and mind are tainted and you're not open to change, then you will walk out of the dōjō the same way you walked in. It is almost the same as drinking alcohol. You are just an intensified version of yourself when drunk. Practicing martial arts tends to be the same.

Complete change is scarce, and it certainly doesn't happen if you have a crappy attitude and don't try to work on yourself. I am certainly not better than anyone else. I do try to work on myself, though. Without the constant attempt to change myself for the better, then I would be another jerk with a sword. I would instead not study bujutsu if that were the case. So with every swing of the sword, I attempt to eradicate, ignorance, ill-will, and hatred from my heart. Martial arts doesn't change you into a hero. You have to apply yourself within martial arts to change.

If you have a stone in your heart budō will not magically remove it for you. You need to work hard to become a better person.

Thank you for taking the time to consider my thoughts.

Learning Iaido Online: The Japanese Art of the Sword

ラジカスキー真照 January 8, 2018 3 Comments
Learning Iaido online is a wonderful challenge. Iaido or Iaijutsu can be deceptively simple in its movements but like anything simple in nature, there are profound depths …
Read More

Bushido: The Soul of Japan

ラジカスキー真照 December 23, 2018 5 Comments
The code of the samurai is always popping up in martial arts circles and popular culture. Written about in the book, Bushido; Soul of Japan …
Read More

ラジカスキー真照 August 21, 2018 4 Comments
Present and switched on The method of critically watching practice is commonly referred to as Mitorigeiko. Last week I was having conversations with one of my …
Read More

Don’t Fall Into The Honey

ラジカスキー真照 January 11, 2020 11 Comments
You only have a little bit longer to live. The end is coming, whether in the most violent or quietly unexpected way; it is coming. …
Read More

ラジカスキー真照 October 19, 2019 8 Comments
There is a saying, "You get out of it what you put into it." It is pretty self-evident, however, that is not how I see …
Read More

ラジカスキー真照 September 1, 2018 No Comments
In 1888 the Tokyo Metropolitan Police department decided to cull various ryu-ha together to form a system of study for their police force. This inculded, …
Read More

ラジカスキー真照 November 30, 2018 5 Comments
I would like to express my thoughts on the concept of mushin no shin — commonly known as mushin (無心) It is different from munen. …
Read More 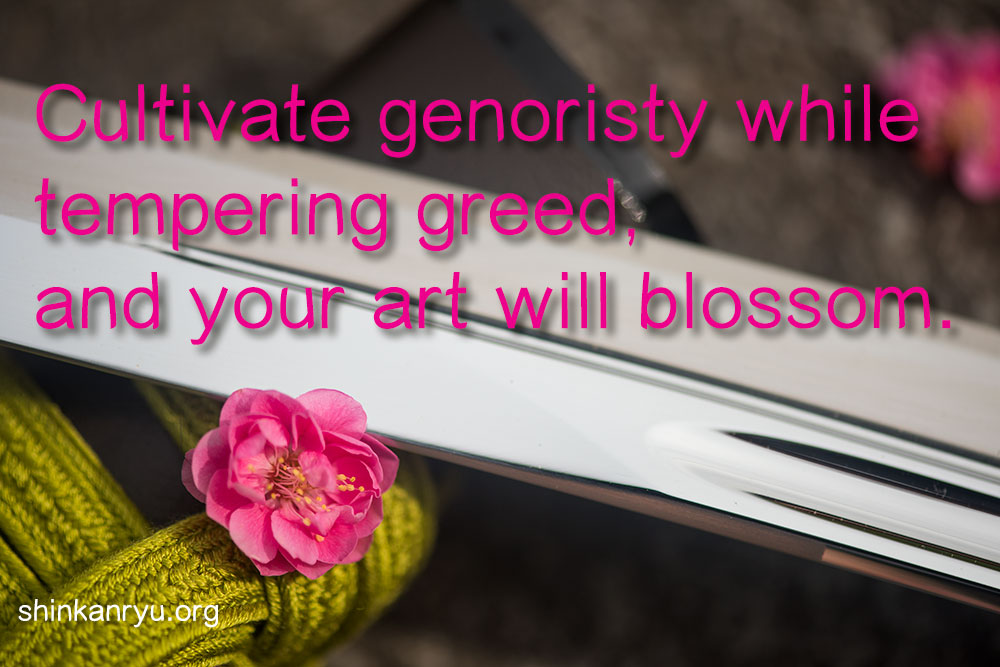 ラジカスキー真照 January 22, 2021 No Comments
We must endeavor to cultivate generosity while looking at the roots of our greed. Removing greed will allow our martial arts to flourish and blossom. There …
Read More

ラジカスキー真照 April 21, 2020 12 Comments
Being righteous and doing the right thing is one of the foundations of body and speech actions, as well as mental formations. Righteous decision making …
Read More

ラジカスキー真照 December 10, 2018 4 Comments
Training in iaijutsu (or any bujutsu) means doing the same thing over and over and over for years. Not just the physical movements need a …
Read More

ラジカスキー真照 February 25, 2020 11 Comments
Many people study more than one martial art. There can be varied reasons such as wanting to learn everything you can, rounding out techniques or …
Read More

The End of Training & Boredom In Martial Arts

ラジカスキー真照 September 12, 2018 7 Comments
Budō Is Limitless When does training end? When do we become a master? The short answer is that it just never really happens. There are no …
Read More

ラジカスキー真照 December 26, 2017 2 Comments
From all of us at Shinkan-ryū Kenpō to you, Have a wonderful New Year Celebration. Thank you for your support.
Read More

Too Many Martial Arts